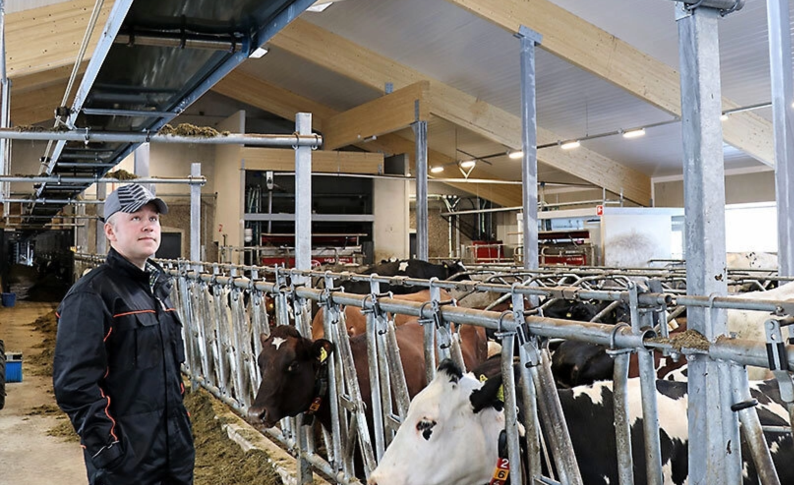 In 2007, Jorma and Pirjetta Rahikkala built a free stall barn on their farm in Kestilä in the municipality of Siikalatva, North Ostrobothnia and acquired a belt-based automatic feeding system for it. The system used a filling table equipped with a ripper that tore up haybales and dispensed the hay directly onto the belt. However, this system did not function as smoothly as it should have.

“Soon enough, we took the whole thing apart and gave up on it. We switched over to a system in which different feeds were distributed separately and silage was transported with a skid loader. This is how we did things until last autumn when the barn extension was completed,” Rahikkala explains.

When Jorma Rahikkala wanted to automate the feeding process in his newly extended free stall barn, distributing feed with a belt feeder proved to be the best solution.

An extension to the old barn was constructed to give more space. In addition to a calving stall, the new extension has stalls for cows and two milking machines.

“The old side of the barn is used for cows that are late in the lactation cycle, dry cows and heifers and has one milking machine. I wanted to automate feeding, and a belt feeding system proved to be the most sensible solution in practice,” Rahikkala says.

He explored the possibility of using the Pellon Feedline automatic feeding system with belt feeders and enquired about experiences people had had with it. Following experiences with his previous feeding system from a different manufacturer, he paid particular attention to the aspects that did not function properly in that system.

“Eventually, I reassured myself that Feedline was a reliable system that I could settle on confidently. Another aspect that supported my decision was the easy availability of spare parts and maintenance services on short notice. The system has been working since last autumn, and we haven’t experienced any teething problems,” Rahikkala recounts.

According to Rahikkala, preventive maintenance – cleaning and lubrication of appropriate components – and maintaining a good belt tension go a long way towards ensuring the system functions properly. 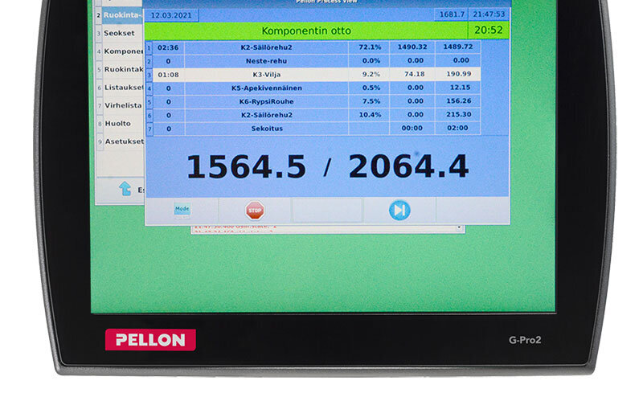 The feeding system’s user interface is located in the unheated feed barn. Jorma Rahikkala was positively surprised to find that the system’s touch screen remains functional even at -30 degrees Celsius. 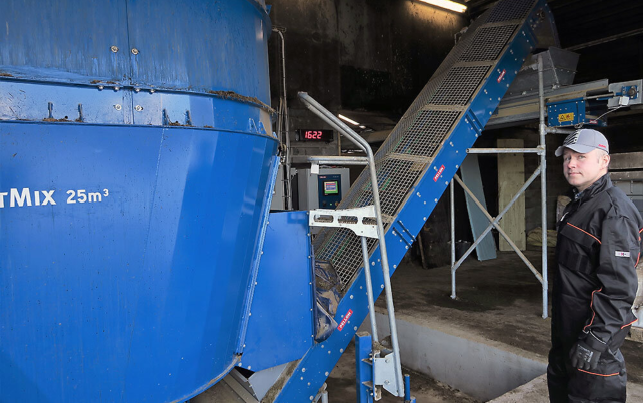 Dairy producer Jorma Rahikkala is highly satisfied with the functionality and efficiency of the Pellon Feedline feeding system. The 25-cubic-metre Pellon CutMix mixer was installed 60 centimetres below floor level in a concrete basin, which allowed for more loading space above the mixer. The closed-bottom scraper conveyor keeps the feed barn tidy.

Bunker silos were constructed next to the feed barn when the extension was built. At the same time, the silage harvesting process was changed by purchasing a shared forage harvester together with the neighbouring farm. It was used to harvest silage for the first time last summer.

The feed barn’s mash feed mixer was installed 60 centimetres below floor level in a concrete basin. This created enough space above the tall mixer to allow for silage to be easily deposited into it with a front loader. Minerals and concentrated feed are transported into the mixer from their own hopper by a screw conveyor.

According to Rahikkala, the choice of using a fixed mixer was supported by the fact that it requires only one tractor, whereas a tractor-towed mixer would have tied up one tractor and required a second for other tasks.

The barn currently hosts 125 cows – a number that is constantly growing. Rahikkala estimates that the barn will reach its full capacity of approximately 180 cows next year.

“With our current number of cows, we prepare a batch of feed once per day but, in the future, we will probably be making two batches a day. The automated system feeds the milkers six times a day, while the separate feed we make for heifers and dry cows is all distributed at once every second day,” he explains. 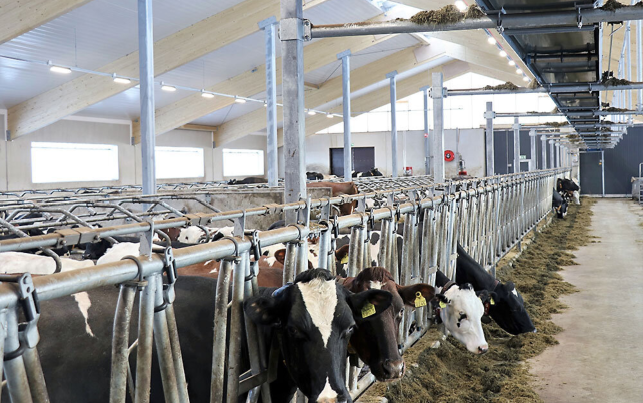 The automated Feedline system distributes mash feed to milkers six times a day, which ensures the cows always have fresh feed available. The maximum number of distributions is eight.

In one mixing, the system can make a batch of a little over seven tonnes, which, in practice, can be done about twelve times. According to Rahikkala, however, there is plenty of play in the ways you can prepare mash feed.

“If you need ten tonnes of mash for the milkers, you can start by making a three-tonne batch, distribute it to the animals and then prepare a seven-tonne batch for the next feeding round.”

We use cookies on our website to give you the most relevant experience by remembering your preferences and repeat visits. By clicking “Accept All”, you consent to the use of ALL the cookies. However, you may visit "Cookie Settings" to provide a controlled consent.
Cookie SettingsRead MoreReject AllAccept All
Manage consent

This website uses cookies to improve your experience while you navigate through the website. Out of these, the cookies that are categorized as necessary are stored on your browser as they are essential for the working of basic functionalities of the website. We also use third-party cookies that help us analyze and understand how you use this website. These cookies will be stored in your browser only with your consent. You also have the option to opt-out of these cookies. But opting out of some of these cookies may affect your browsing experience.
SAVE & ACCEPT
Powered by